An Overview of ‘The Role of ‘Place’ in Collaborations’: Place-based and Place-focused Cultural Knowledge Exchange’ 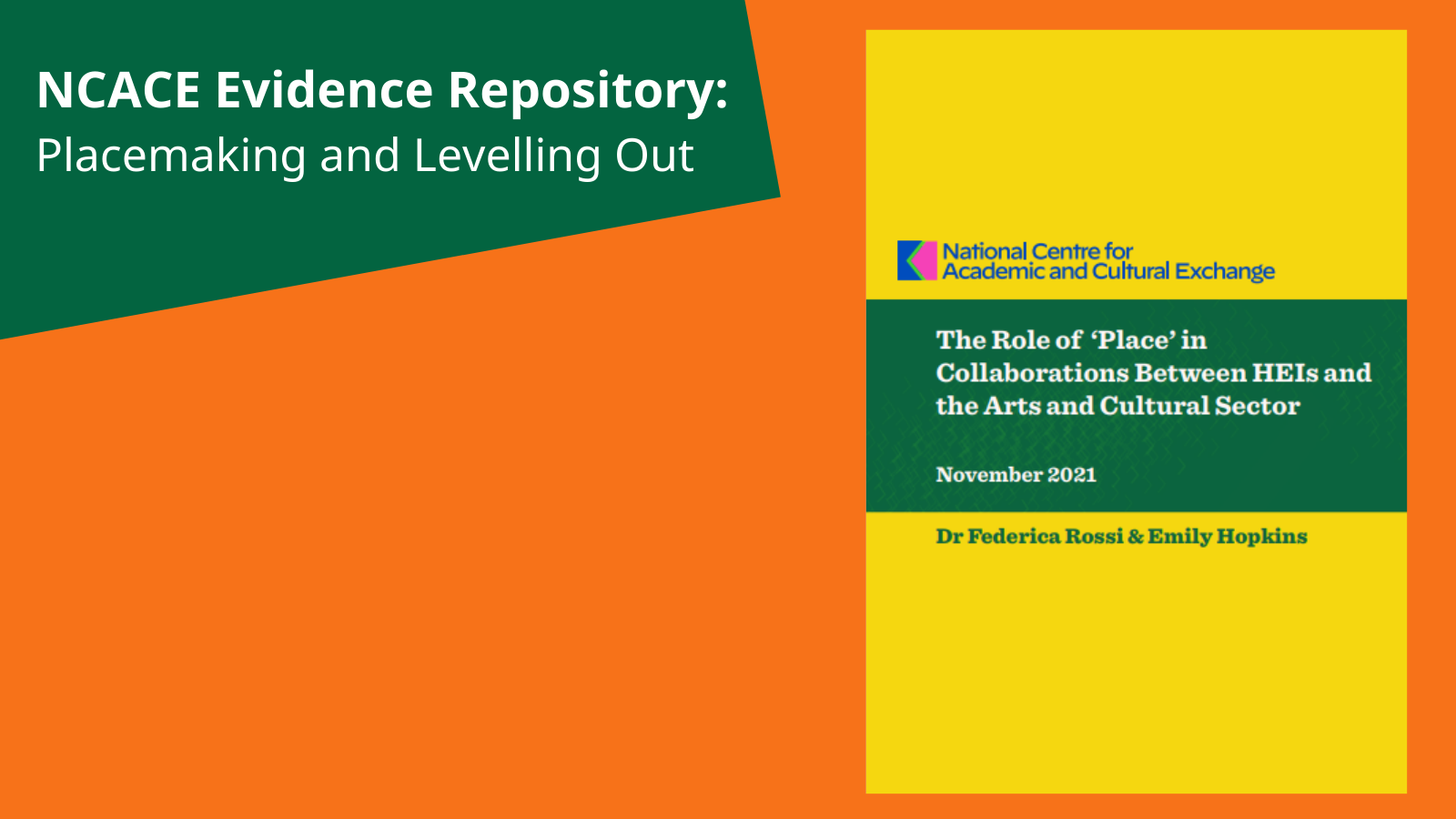 Discussions we have around cultural knowledge exchange collaborations often involve a focus on geography - whether that be physical boundaries, or the sense of place of an area. Much of the work at NCACE this last year has focused on our ‘Placemaking and levelling out’ theme - one of the four core themes guiding our centre. Place-based and place-themed collaborations between cultural practitioners and universities show no sign of abating, particularly in the policy context of the levelling up agenda, which only further encourages culture-led partnerships.

Our survey with Arts Professional, ‘Collaboration with Higher Education’, gathered 546 responses from cultural practitioners about their cultural knowledge exchange collaborations with universities. 64.75% of respondents cited that their work aligned with ‘Place and/or Placemaking’, making this the most reported theme in the survey. Alongside a number of events (including our placemaking Evidence Café and Collaborations in Placemaking policy workshop), this research led to a report which explores this topic further. The Role of ‘Place’ in Collaborations Between HEIs and the Arts and Cultural Sector sits alongside our general findings report but gives a deeper understanding on the formation, nature and successes of place-based and place-focused cultural knowledge exchange. This blog provides an overview of the two core sections of the report.

Responses also gathered information on how collaborations were initiated and funded, and how this correlates with the location of the HEI partners. Direct initiations with HEIs were - unsurprisingly - more common between partners located within the same region, highlighting the links between place and the development of direct contacts and networks. It also appears that local authority, university and Arts Council England funding is more frequent for collaborations within the same region, whereas other grants (e.g. research councils) are more likely to connect partners from different regions.

What was particularly interesting is how the geographical proximity of partners had influenced the roles within the collaborations. For example, organisations that reported their most impactful collaboration with a HEI in the same region were far more likely to have used university resources/expertise in their project. Collaborations with HEIs in a different UK region, however, more likely involved teaching and mentorship roles. Further research on the duration of these collaborations would be fascinating to add depth to these findings.

The section half of the report includes a “place-focused” section, where thematic analysis of qualitative response data helped us to draw out the content and nature of the collaborations. The majority of examples reported were discussed in relation to their social impact or socially engaged nature, largely working on co-production projects with academics and local residents/communities. This included the development of local community archives or co-designed public art pieces.

The second most reported collaboration style involved interactions with local students - whether teaching on modules at a university level or leading activities with children in primary/secondary schools. Respondents spoke about how this embedded work with young people hoped to encourage students to become active cultural producers and/or consumers in their surrounding locale, which was particularly important in towns and rural areas. Other collaboration styles developed the cultural skills and capacity building: practitioners discussed their expertise alongside academics in developing training programmes, aiming to strengthen the existing cultural sector in a place.

It was less likely for respondents to discuss the economic impacts of their place-focused collaboration, but those that were reported spoke to specific pools of financial support (e.g. a place-based investment provided by local authorities, central government or arms length bodies). Collaborations focused on physical spaces were less frequently mentioned but still apparent, with involvement in regeneration or cultural quarter planning. Fewer respondents discussed their role as advisors or delivery partners within the governance of site-specific cultural initiatives, such as roles on boards and consortiums with a multi-stakeholder focus. Finally, the least cited collaborations were those which co-produced research or co-evaluated an activity alongside academic partners, most frequently using creative research methods. This led to co-authored outputs such as journal articles, conference papers and lectures.

Hopefully, this blog will have given you further insight into the place-based and place-focused findings that were drawn from our place report. For further findings and recommendations, please do read the full document here - we would love to know your thoughts and find out about more place-related collaborations.