Lived experience, co-creation and creative possibilities for health and wellbeing 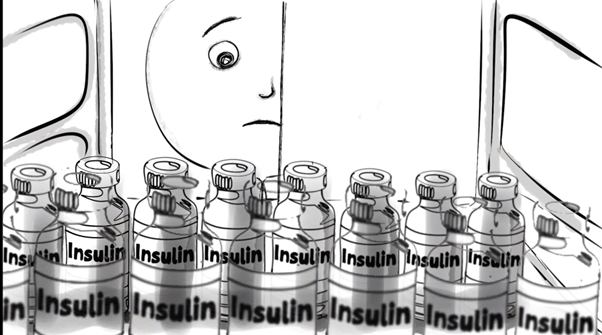 On 3rd November 2022, NCACE hosted an Evidence Café on Cultural Collaborations for Health and Wellbeing. I was delighted to welcome delegates to listen to presentations and watch artistic outputs from three collaborative projects which focus on improving mental and physical health for young people and professional dancers.

The field of creative health is large and expanding. Collaborations between medical or psychiatric research areas and the arts have increased since the pandemic and are now a focus for research council and Arts Council funding. Yet the arts and cultural industries have always been engaged in improving health and wellbeing, and one could argue that they are intrinsic to both personal and social wellness. This Evidence café was an opportunity to share evidence and best-practice from a selection of projects that range in size and focus.

What’s up with everyone?

First we heard from Professor Paul Crawford, who founded the field of Health Humanities globally and directs the Centre for Social Futures at the Institute of Mental Health, at the University of Nottingham. Paul spoke to us about the AHRC-funded project he led with Aardman film - What’s Up With Everyone?, which involved working with a large team of clinicians and researchers (from the universities of Nottingham, LSE and Loughborough) and creative producers from Aardman to co-produce animations with young people to advance mental health literacy. The campaign features five anthropomorphised characters who are each dealing with common mental health struggles, such as perfectionism, competition, loneliness and social media. The characters were co-designed with 42 young people, and voiced by five of them. The campaign was released in February 2021 and won Best Design and Content in the 2021 Design Week Awards. With the backing of Universities UK, schools, MPs, mental health organisations and celebrities such as Stephen Fry, it reached over 17m people within four months of launching.

Paul spoke about the importance of involving society more deeply in public health and developing a social ‘shadow health service’. His work revolves around strategies for assisting, supporting and energising the public to see creative possibilities for treating and preventing illness. Afterall, we all use creative means for surviving and recovering, so why not use them also as preventative measures? The mental health literacy needs of young people have unsurprisingly become even more pronounced since the pandemic, in the face of rising social and financial inequalities, the climate emergency and war in Europe. The themes covered in the campaign were identified by the young people involved in the project as key life challenges. Paul describes these as ‘upstream’; pre-diagnostic, more generalised mental health challenges, and providing creative support and coping strategies at this stage is crucial for improving long-term mental wellness. Following the launch of the campaign, a policy briefing was delivered to the Health and Social Care Committee Secretariat and an initial evaluation of the project revealed it has improved young people’s confidence in accessing mental health support and improved peer support. These findings are currently being developed into an academic paper, and Paul has just published a book, Mental Health Literacy and Young People, which invites young people to play a more active role in advancing their own mental health, not least through fuller use of social and creative assets.

The next presentation at the Café came from Professor Angela Pickard, the UK’s first professor of Dance education and Dance Lead for Parents and Carers in Performing Arts (PiPA) where she is researching challenges and barriers to career progression for dancers that are parents and carers. Angela spoke to us about a current practice-based research project in collaboration with PiPA, which began following a realisation that there is paucity in research around what happens to dancers when they decide to start a family and/or gain caring responsibilities. There has been a 7% decline in people identifying as dance artists, dancers and/or choreographers since 2020 and once they reach their mid-thirties, dancers tend to retire due to caring responsibilities. There is a distinct lack of visibility of pregnant dancers in the industry, in addition to a lack of support during pregnancy and lack of accessible back-to-work programmes post-partum. Angela has been working to improve inclusive policies within the industries; working with choreographers and dance companies to create family-friendly policies and industry standards and benchmarking, creating sectoral and peer support for freelance dancers returning to work, establishing visible role models to help normalise pregnancy and caring responsibilities in dance, and reviewing and implementing working practices to retain dancers who are parents and carers.

There is a wider inclusive conversation around this important research, as it has engaged not just with pregnant women, but also men and same sex couples with caring responsibilities. It certainly highlights discrimination within the sector and speaks to the wider discourse of upstream mental health literacy amongst dancers, both in supporting pregnant dancers experiencing confidence and identity challenges, and in putting social support structures in place for carers within the profession. Furthermore, this research supports Paul Crawford’s wider strategy for encouraging the public to see creative possibilities for treating and preventing illness, as both watching and practising dance is such a powerful way to improve both individual and social health. You can read more about Angela’s research on the PiPA website.

The final presentation of the afternoon came from Katja Stiller of Breathe Creative, and Paediatric Diabetes Specialist Nurse Rachael Humphreys from the Cardiff and Vale University Health Board. Katja is a therapeutic arts facilitator who specialises in working with people with physical and or mental health needs. Katja was approached by Rachael, who works at the Noah’s Ark Children’s Hospital for Wales, and has recently been appointed as the National Lead for Type 1 Diabetes and Eating Disorders in Wales, to work with a group of young people to develop a short animation about type 1 diabetes (T1D) and disordered eating. The purpose was to work towards implementing sustainable change that has a direct impact on patient outcomes.

People with T1D are twice as likely to develop an eating disorder, in fact it's believed to occur in around 30% of the population and these statistics have escalated during the pressures of the COVID pandemic. Often, the more widely recognised eating disorders do not fit the reality of those living with T1D, which involves a constant battle between administering medication for blood sugar regulation, food intake and energy output. Katja and Rachael collaborated with young people living with type 1 diabetes to make ‘Swimming with the T1DE’ (Type 1 Disordered Eating), a short animation created by Jane Hubbard featuring the drawings and voices of the young co-creators. Understanding the value of co-production was integral to this project, which both respected the lived experience and safeguarded the wellbeing of the young co-creators. Katja used a person-centred approach and facilitated the creativity of the group through weekly virtual sessions, taking them along on the creative journey whilst preserving both their anonymity and identities. Again, operating at the upstream level, findings reveal the short film has increased self-esteem, awareness and confidence within the group.

The film has been shown at the Parliamentary enquiry into T1 diabetes and eating disorders, led by Sir George Howarth MP and Rt. Hon Theresa May MP. It has been shared by two of the main T1 diabetes charities on their social media platforms and within different health boards across Wales. It is also being used in schools to educate staff and pupils about the challenges faced by young people living with the condition.

What came through strongly from the Evidence Café was a common commitment to using creative strategies for positive impact in the upstream, pre-diagnostic position. As seen in Swimming with T1DE and What’s Up With Everyone, the benefit of creating short animations is threefold: they increase dissemination of the message especially amongst younger people, animations themselves are accessible and inclusive, and the creative outputs can remain online ad-infinitum, thereby ensuring the legacy tails of the projects. With a focus on mental health as well as physical, all the projects showcased in this event worked collaboratively with the very community they intended to reach. Including focussed stakeholders in this way has led to creative outputs and policy recommendations that come directly from the specific community in need. Through adopting an inclusive process of co-creation between researchers, artistic practitioners and those with lived experience, all of the collaborative projects demonstrate evidence of impact upon the individuals involved, and have also affected wider societal change with integrity.

NCACE will be running a Policy Workshop on cultural collaborations for health and wellbeing on 22nd June 2023. If you would like to contribute information about a project or attend, please let us know by emailing laura@tcce.co.uk