Around the Kitchen Table 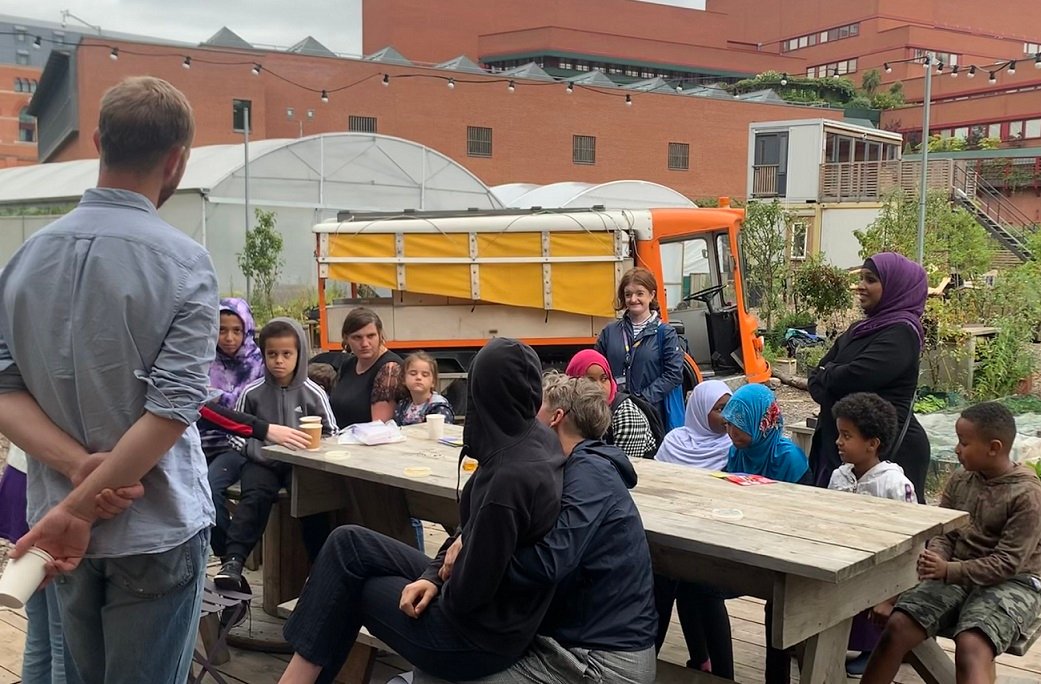 For five weeks during the 2021 summer holidays, the youth cooking charity Eat Club teamed up with partners from the Kings Cross Knowledge Quarter to deliver a unique cook and eat programme, themed around each partner’s work. The project was intended to explore the exciting possibilities of using food and food culture for knowledge exchange between academic institutions and local young people.

Every Tuesday morning, we met outside the Somers Town Living Centre – a community health and wellbeing centre between the imposing Francis Crick Institute and a 1970’s housing block. A place at the heart of one of the world’s greatest and fastest changing knowledge clusters. From here we would walk to our host organisation to discover a little about what they do and continue the conversation over a meal we cooked together that related to that partner’s work.

In week one we stayed quite local, visiting the Story Garden (a community garden and education space squeezed into an unlikely brownfield site between the Crick and the British Library). Here we sat in a circle, right in the middle of the garden with the British Library’s Community Engagement Manager easing any awkwardness and shyness by sharing a snack of summer fruit toasts and homemade lemon squash while being introduced to this great institution.

The session was all about sharing food and sharing stories and the idea was that making food is a way to materialise meanings. Jane Riddiford, Director of Global Generation who founded the Story Garden, used the meal to speak about how – like cooking – she uses gardening to tell stories, in particular the fundamental story of our relationship with nature.

The following week, we were over at the Charles Dickens Museum for Victorian cheese on toast and walnut ketchup – accompanied by excellent round-table parlour games led by the Museum curator. Third was a mise-en-scene lunch with the Theatre of Debate, set up in an acting studio and book ended by a film showing and drama workshop. Fourth week was all about homemade pizzas cooked with a yeast scientist from The Francis Crick Institute – giving us an insight into what goes on inside the impressive Institute building while digesting some DNA! And finally, we held our fifth and final session with the Somers Town People’s Museum. A lunch prepared in the courtyard of a housing estate surrounded by the public ceramics of Gilbert Bayes. During the meal, we discussed everything from art in everyday life and salt glazed pottery to the origins of Pearly Kings and deep-sea snails.

From the perspective of a community cooking programme, it felt like we were doing something new. We were teaching the core skills of chopping, mixing, grilling and baking; passing on knowledge of where food comes from and how it’s produced but we were also showcasing the cultural capacity of food to broker unexpected bonds between what made it to our plates and the wider world. We were not just teaching about food but facilitating learning through food experiences. 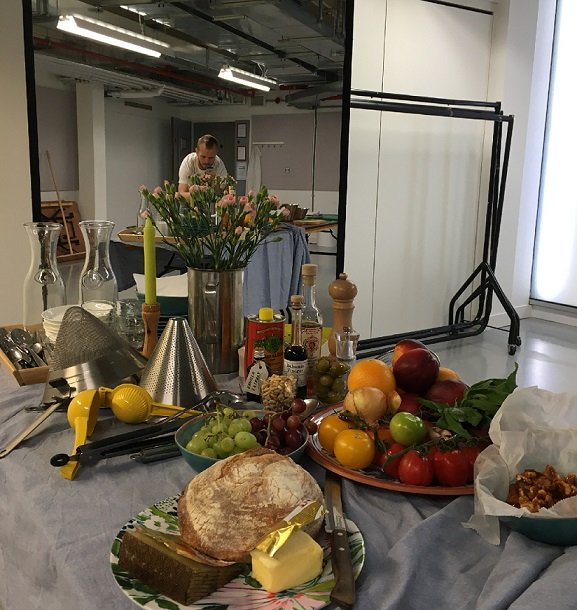 The impacts were unexpected, dynamic and surprising. For the first three weeks, having struggled to get our heads around the notion of designing meals based around topics as diverse as the themes of stories and gardens, the Dickens family, theatre, yeast DNA and social history, we also needed to work hard to recruit our participants. By the end of week three though, we’d had twelve different young people take part and a local family from Somers Town coming back each week . By week four we were cooking pizzas without an oven and by week five we were moving a mobile-kitchen-milk-float into an historic courtyard to prepare a giant rice salad.

Across the programme the young participants (who ultimately ranged from five to eighteen – or eighty if you include the young at heart People’s Museum attendees) showed a really high level of engagement with the themes, both intellectually exploring the different topics (listening and asking questions) and participating physically. They had not simply been taught about literature, gardens and theatre in the abstract but were able to tell their own stories in an inner-city roundhouse, take a smell test in a Victorian scullery, eat DNA and cook up a storm.

Food (from cooking to eating) is a cultural and creative medium much like music, dance, theatre and literature that can be utilised for knowledge exchange. In many cases food is already there in knowledge exchange settings – from conference lunches, gallery cafes and intermission dinners (often with a considerable budget behind it). The unconscious or unspoken power of food to make space for lateral thinking and group reflection is often its chief strength, yet it seems like sometimes we should ask food to work a little harder.

What this project has shown me is that if we can walk the line between food’s literal and non-literal communicative qualities then it can facilitate exchanges of ideas in really accessible, convivial and unexpected ways without being overbearing to community groups.

Cooking sessions, menu design and meal curation I believe have a unique contribution to offer to knowledge exchange when they successfully bring together the multiple dimensions food operates on as a cultural, social and material form. To forge unexpected bonds between academic institutions and community groups, the kitchen table is a great place to start.

If you would be interested in finding out more about the project or collaborating on a similar activity, please get in touch with David at davidgeorgethomson3@gmail.com.